2018 Gift Of The Heart – Gloucester County Institute Of Technology

The law firm of Hoffman DiMuzio has allocated close to half a million dollars to its Gift of the Heart Community Scholarship Foundation. Forty-nine graduating seniors from Gloucester, Cumberland, and Salem County High Schools have been selected to receive a one thousand dollar scholarship for embodying the service ideals of the program. This week, the 2018 Gift of the Heart Hoffman DiMuzio Community Service Foundation recipients are from the Gloucester County Institute of Technology: Alyssa Sileo and Burrell Carlson.

Through her service Alyssa Sileo has coupled two passions: theatre and giving back to her community. Following her participation in the Laramie Project, a performance that centers on the events following the death Matthew Shepard, Alyssa felt compelled to take action.

In December 2016, the Laramie Project project (LPP) was born. LPP is a “theatre advocacy initiative” which executes performances in honor of hate crime victims. This project has since spread both across the country, and internationally. Currently there are 64 LPPs from 23 states and 3 other countries.

Alyssa’s theatre advocacy is far from limited to her work with LPP; in 2017 she created the Urinetown project. That year her school’s musical, Urinetown, told the story of a dystopian town dealing with a water shortage; under desperate conditions, the characters are forced to pay to use bathrooms. In order to raise money, the cast and audience attending the performance opted to donate money when using the bathroom. All proceeds were then donated to aid the community of Flint, Michigan.

Alyssa completes additional volunteer work through her theatre troupe ACTing Out and thespian Troupe 5480. Keep up the great work, Alyssa! 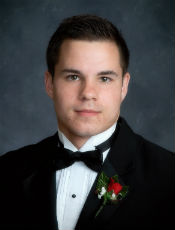 Over the course of his high school career, Burrell Carlson has had the opportunity to participate in several mission trips and to volunteer as a member of the Royal Rangers, a church-based organization.

Burrell’s travel was completed through the Pitman organization, Erin’s Gift of Hope. The stated goal of the organization is to plan trips across the United States to aid communities in need. Starting back in 2013, Burrel has participated in these service trips annually. Following Hurricane Sandy, he worked with a construction team to help rebuild homes and hold craft events for children affected by the storm.

In 2016, Burrell traveled to Machias, Maine to complete construction projects for a home for those in recovery from addiction. With a team, he “built a shed, restored a deck, and painted the interior of a room.” Additionally, he helped build a second floor addition to another house. These are a few examples of the many trips Erin’s Gift of Hope has held.

At GCIT, Burrell specializes in the welding trade. He has competed with skillsUSA, and earned second place under the Health and Safety Committee. Thank you for your service, Burrell!

Sincere congratulations are extended to GCIT students Alyssa Sileo and Burrell Carlson, as well as to their proud parents, family and friends! Next week, the featured Gift of the Heart recipients will be from Delsea high school.